Sceduled to rock on Lake Stage, the second biggest stage, CNBLUE posted their pride on twitter, can you guess whose hands are they?

On the last day, the artist who appears as the 2nd performer at LAKE STAGE is 4 piece band, CNBLUE. They are not only active in Korea or Japan but also in Asia and get enormous popularity now. They got to their position at the stage kindled smoke, a brave shout “ROCK IN JAPAN!!”. The dazzling vocal relays by Jung Yonghwa (G&Vo) and Lee Jonghyun (G&Vo) led an English R&B number, “Where you are”, their performance started. Jonghyun’s guitar solo with lighting speed was awesome and changing into the next song, Yonghwa’s stirring like ‘Only music, are you ready!?’ was an expert. By Lee Jungshin (Ba) ‘s supple playing and wild beats by Kang Minhyuk (Dr), calls and responses were arisen. The excitement was getting hotter and hotter. Jonghyun told ‘A little earlier, but shall we liven up!?’ after this, hand-clap and sing-along was added skillfully. 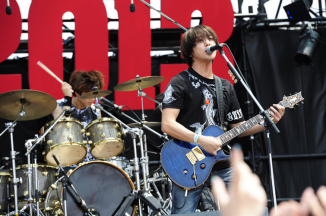 ‘We’re CNBLUE, we came here from Korea for this event!’ Music is nice all the same! (Jonghyun)’ ‘Are you hot? Be hotter. It was warm up until now. The real CNBLUE is here from now on. Today, you don’t need to work, your boss isn’t there, so let’s enjoy with all our hearts! (Yonghwa)’ It’s fun that they talked to us with Japanese. Jonghyun is so fluent that we are surprised, Yonghwa fired wise remarks ‘This isn’t beer, this is tea. Shall we go with sense like tea?’ ‘Where is the coffee shop?’. At the latter of the performance, they successively showed light and impregnable dance-rock. They carried out their words that they nicely liven and liven up. It’s excellent. After ‘I’m Sorry’, the climax was their latest single ‘Lady’. The song with falsetto chorus made us dance without choice. They will release a new album ‘What turns you on?’ on August 28th. Their performance let us expect even more steady advance.

Behind the stage, CNBLUE did as Jonghyun ever told in one of the interview that he wants to have more interaction with other performers once they participated on the Japan rock festival. And at Rock in Japan the had a shoot with Orange Range. A senior Japanese rock band to CNBLUE.

Short after, Minhyuk updating their Daum Fancafe with selca each of the members, telling how fun and how hot the stage was. He even told  just after finishing 3rd song, they felt almost collapsed due to the summer heat. Here the selca you can enjoy 🙂 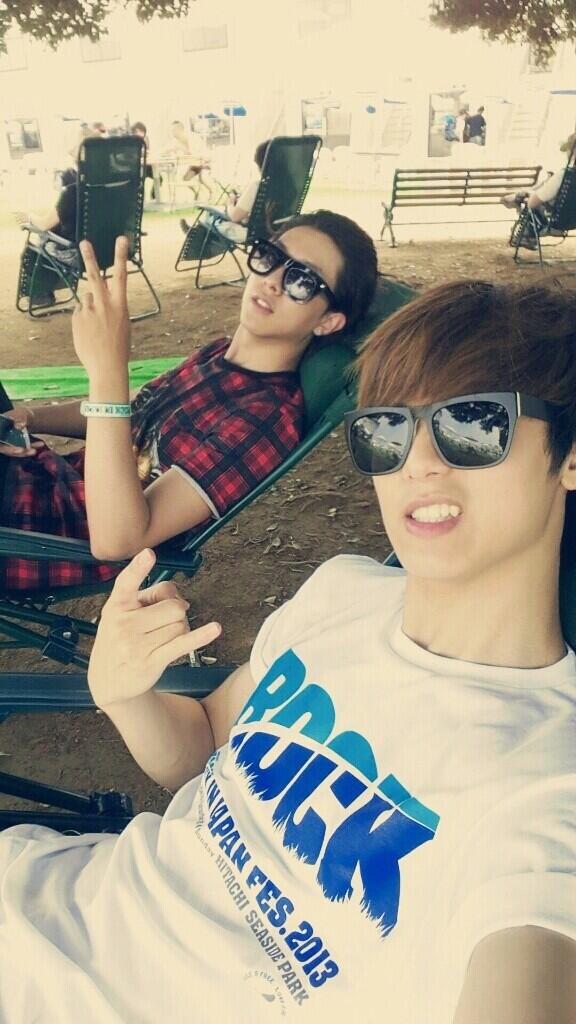 6 thoughts on “CNBLUE at Rock In Japan Festival”